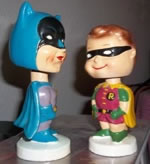 The Bobbleheads, were stated by the seller to have been made in Japan in the 1960's.

The auction received 19 bids from 8 different bidders over the course of 7 days. The auction view-counter recorded over 700 visitors to the listing.