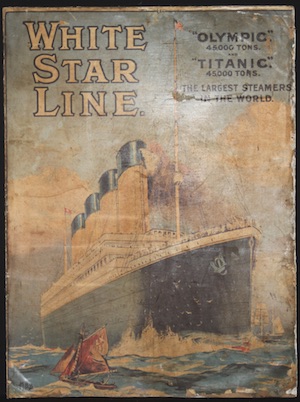 WALES, UK - A couple renovating a Victorian home was surprised to find an early Titanic promotional poster, worth up to $4,000 (£3,000), hidden in a wall.

According to a story in the Daily Mail, the couple discovered a landscape painting hidden in the cavity of a demolished wall. After they removed the painting from its frame, they found the 23 x 32 inch poster underneath.

The poster, produced for White Star Line sometime between 1910 - 1911 is extremely rare, according to a statement in the auction description provided by Henry Aldridge & Son;

"After the Titanic disaster their posters were withdrawn from service and destroyed which explains why there are only a handful in existence today."

The image on the poster was also created by Montague Birrel Black, a well known marine artists at the turn of the 20th century. Having few examples by the artist only adds to the posters rarity.

The poster will be sold on April 23, 2016. The online auction listing can be seen here.

WhatSellsBest.com is a free website which monitors millions of auction items, to track the top selling (highest bid) items on eBay, and report top sold items from a variety of specialty auction houses worldwide.

Founded in late 2008, by James Massey, the site has quickly became a valued resource for collectors and treasure hunters interested in knowing which rare antiques and vintage collectibles were selling best at auction.

Journalist and reporters from a wide-variety of media outlets, (CBS, AOL News, Inside Source, eBay Radio, Smart Money, and others) have also found WhatSellsBest.com to to be an informative and helpful website.

While all other uses are prohibited without prior written permission (from whatsellsbest.com), we are friendly, and often willing accommodate mutually beneficial ideas and collaborations.

Feel free to contact us with any questions and/or comments. More info about WhatSellsBest.com is posted below.


*Price is based on foreign (currency) exchange rate at time of sale.
** eBay auction links generally expire within 90 days of auctions end