Hidden in Plain Sight... Owner had No Idea they were Valuable 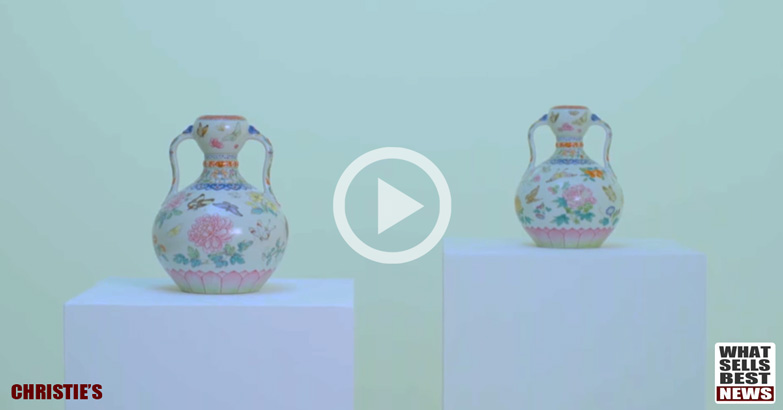 LONDON (VIDEO) – A rare pair of 18th century vases, found during a routine valuation, have fetched $19 million (£14 million) at Christie's. Prior to their discovery, the owner had no idea of their rarity or value.

The extremely rare pair of 9-inch-tall Chinese vases, are described as 'Butterfly' double-gourd vases with a Qianlong six-character seal under-glazed in blue. The vases are dated between 1736 and 1795.

The moment of discovery is recalled in a video with Rosemary Scott, a Chinese ceramics specialist for Christie's. "It was one of those wonderful eureka moments, My colleague Jeremy Morgan was on a perfectly normal valuation visit when he walked into the drawing room and there, on the mantelpiece, he saw these vases. He couldn’t believe his eyes."

Our research indicates a number of extremely valuable Chinese ceramics have been found in unusual places and circumstances. Often hidden in plain sight.

Here's a few notable examples (note: quoted prices may vary due to currency exchange rates at time of the sale, and buyer premiums which may, or may not, be reflected in prices):

What Should You Look For?

There are a number of highly rated books on Amazon.com, or at your average library. They can help you learn more about the distinctive marks and styles to look for. You might also check out the videos posted below.

Have old Chinese ceramics laying around? Try using the free resources available here for getting free online appraisals from top auction houses. Or try contacting the auctioneers listed above for a free online valuation.

The pair of vases featured in this story were sold in London by Christie's on May 9, 2017. At the time of this publication, they were still listed on the Christie's website as lot number 99.