One of a kind and hidden 40 years 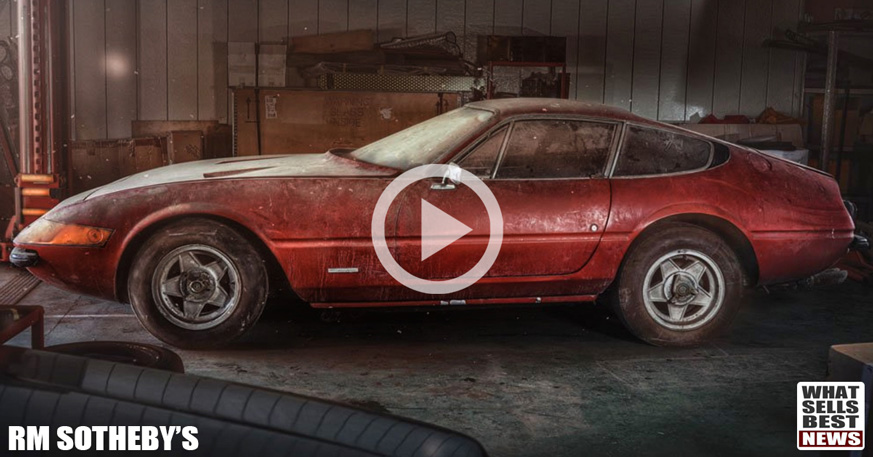 The 365 GTB/4 Daytona was discovered in a Japanese barn.

MARANELLO, ITALY (VIDEO) - A rare 1969 Ferrari, discovered in a barn in Japan, has fetched $2.1 million at auction, according to RM Sotheby’s.

The amazingly rare Ferrari, a 365 GTB/4 'Daytona' aluminum street car, was discovered in a barn in Japan after disappearing for 40 years.

Ferrari only acknowledges the 'Daytona' portion of the name as an unofficial moniker for this vehicular work of masterful design. The media christened the model with the name 'Daytona' in commemoration of Ferrari’s top three sweep at the 1967 24-hour Daytona race.

This street car hails from an era of intense rivalry between Ford and Ferrari, which ignited after Enzo Ferrari unexpectedly pulled out of a deal with Henry Ford II to buy Ferrari in 1963. In his anger, Ford decided if you can’t buy ‘em, beat ‘em, and he set himself, his team, and his company on a course of revenge.

After a couple of failures in 1964 and 1965, Ford’s GT40 swept the Le Mans 24-hour race, garnering first, second, and third place with their well-designed vehicles. From 1966 onward, Ferrari was able to take victory a few times, like at the 1967 Daytona race, but the balance had tipped in Ford’s favor. Eventually, Ferrari changed their focus to the Formula One race series.

Luciano Conti, the publisher and founder of Autosprint and close friend of Enzo Ferrari, was the first purchaser of this barn find car. Ownership of this special Ferrari passed through a series of hands, until finally it was sold to Makoto Takai, who hid the car for the last 40 years.

Between 1969 and 1973, Ferrari only produced 1,200 versions of the 365 GTB/4 Daytona, and only five of those were made as lightweight alloy competition cars. Of those five, this car was made as an aluminum “street model”, making it one of a kind.

RM Sotheby’s reports that this car was inspected personally by Marciano Massini, renowned Ferrari expert, who concluded it was “a super scarce Daytona barn find, the only remaining aluminum-bodied production GTB/4, sold new to Luciano Conti.”

Among barn finds we’ve tracked, this one definitely ranks in the top tier on our list.

Minute details can make all the difference in the pricing of rare cars. If you ever find an old car in a barn, you might want to reach out to our recommended experts on the free appraisals page.

THE 'MOST WATCHED' FERRARI'S ONLINE

See if you can to spot a bargain among the most-watched Ferrari's listed online, on ebay (research prices). Also see; Top 25: Cars on ebay, worldwide, right now (links open on ebay).