Mistaken and overlooked as an inexpensive-print 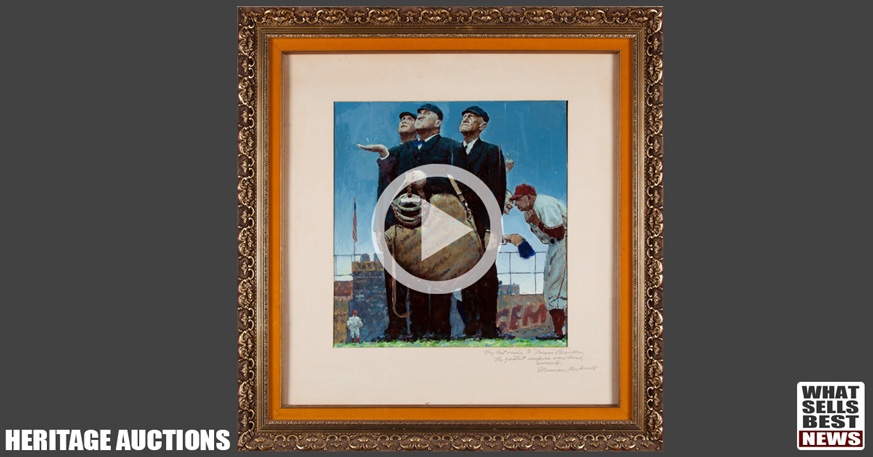 DALLAS, TEXAS (VIDEO) – Wochit News reports, a Norman Rockwell original, once believed to be an inexpensive print of a famous painting, fetched $1.6 million at Heritage Auctions.

The owners of the painting assumed that it was nothing but a cheap print with an inscription, revealing it had been gifted to the legendary Umpire “Beans” Reardon. However, upon close inspection, auction house experts determined the work, signed by Rockwell, was the original oil on paper study of the famous painting, “Tough Call.”

A paper study is a practice piece created to try out a painting idea before it is painted on canvas. According to Chris Ivy, director of Sports Memorabilia at Heritage Auctions, “it is remarkable to still discover such an important Norman Rockwell original artwork after so many years.”

Rockwell’s final painting on canvas was completed in 1948, and is currently hanging in the National Baseball Hall of Fame in Cooperstown, New York.

The work became an instant classic of American illustration art. It was published as a 1949 Saturday Evening Post cover and was also featured on a postage stamp issued by the Turks and Caicos Islands in 1982.

Norman Rockwell (1894–1978) is a popular 20th century American painter and illustrator whose works reflected the American culture. Throughout his lifetime, he produced a large number of original works which are now either in public collections or were ill-fatedly destroyed in fire and other unfortunate disasters.

Though he reportedly created more than 4,000 pieces, original Rockwell works are highly sought by collectors because of their rarity outside of museums.

Norman Rockwell originals are known to ignite bidding wars that end with prices reaching in the millions. Here are a few examples:

It takes an expert eye to recognize authentic paintings so if you think you might have one, check with the experts on our free appraisals page.

The 16-inch by 15-inch Norman Rockwell paper study for the painting “Tough Call” was sold in Dallas, Texas by Heritage Auctions on August 20, 2017. The piece sold at an incredible price of $1.6 million, five times the pre-auction estimate of $300,000. The auction lot number was 80067.