Hidden in Storage Room for 95-years 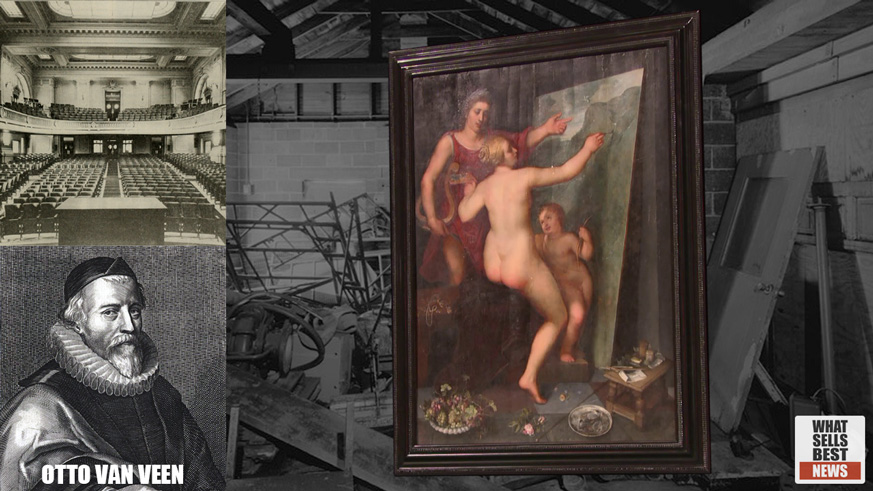 DES MOINES, IOWA - A 400-year-old painting found in a theater storage room, may be worth millions.

The painting, by the Dutch master Otto van Veen (1556 – 1629) may have been hidden for 95-years inside the historic Hoyt Sherman Place theater.

Reportedly, Hoyt Sherman’s executive director, Robert Warren, found the painting while looking for flags in a storage room under the theater’s balcony.

Robert Warren recalls discovery of painting for Inside Edition.

Warren noticed the painting behind a table, leaning against a wall. A tag attached to the work, indicated it was donated in 1923 to the Des Moines Women’s Club at Hoyt Sherman.

There's speculation the painting may have been hidden at that time, due to its sensual nature.

The artist, Otto van Veen was a painter and humanist, primarily active in Antwerp and Brussels during the late sixteenth and early seventeenth century.

That era was known as the Dutch Golden Age, and it was good for artist. Fueled by growth and prosperity of wealthy merchants in the Northern Netherlands, near Amsterdam's harbor.

Besides paintings. Otto van Veen is also known for his drawings, emblem books, and for teaching the prolific seventeenth-century painter, Peter Paul Rubens.

Otto van Veen’s work is highly valued, and displayed in many major museums around the world. Including the Paris Louvre, Austria's Kunsthistorisches Museum and New York's Met to name a few.

Compared to other painting discoveries we’ve tracked, this one is substantial. Both for its historical significance and its potential monetary value, which some believe may be in the millions.

Small details can make a big difference when identifying and valuing art. If you believe you have something, you should go to our free appraisals page and contact one of the experts listed there.

Reportedly, there are no plans to sell the painting, which is going to be put on display at the Hoyt Sherman Art Gallery. However, we'll keep you posted if we hear anything different.

To monitor the real-time price strength of more common Dutch art items. Keep an eye on the highest bid items (below) in the art and painting categories on eBay. To research sold prices for rare or common art, click here.

FIND-PRICES > See how much buyers pay, for most anything.