Discovered in Attic Destroyed by Tornado 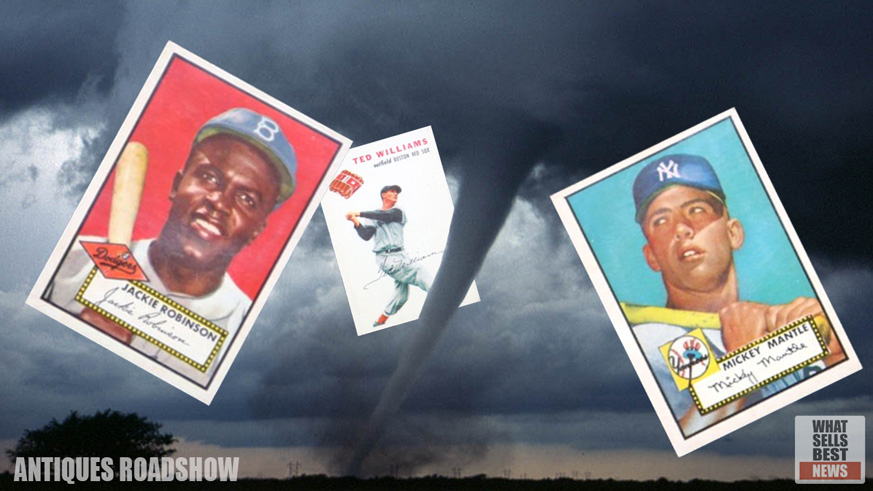 GREEN BAY, WISCONSIN - Antiques Roadshow reports three baseball cards brought in by a guest that were collected in the 1950s may be worth as much as $48,000.

A guest of Antiques Roadshow brought in three baseball cards collected by her husband in his childhood. Her mother-in-law kept the cards in a grocery bag all of these years instead of throwing them away. In recent years, this guest and her husband came into possession of the cards, and they stored them in the attic.

One weekend while her husband was away, she decided to go through his collection. She discovered that he had quite a few cards in great condition. Her decision turned out to be a fortuitous one. About a month later, a tornado destroyed the attic and damaged much of the house. Thankfully, she had ended the cards’ attic banishment which rescued them just ahead of the tornado.

Grant Zahajko of Grant Zahajko Auctions sat with this guest to examine the grouping of cards she brought in. He pulled out three specific cards to talk about. The first was a 1952 Topps Jackie Robinson card. Mr. Zahajko estimated this card’s value at $2-4,000 and gave it a numerical grade of six.

Jackie Robinson was a second baseman, and the first African American to play in Major League Baseball (MLB). He played his first game with the Dodgers in 1947. In 1997, he was honored as no other player in any other sport had been. The MLB retired his jersey number across all major league teams.

Then they moved onto the 1954 Wilson Franks Ted Williams Premium card. Mr. Zahajko noted the card’s sharp corners, but that it also had a little staining on the back. With the card’s small lower left corner crease, he gave this card a grade of four and estimated it’s value at $2-4,000 as well.

Ted Williams played in the the MLB for 19 years. He paused his career to serve in World War II and the Korean War. He played for the Boston Red Sox as a left fielder. He achieved the highest career batting average of any player who played during the “live ball” era (from 1920 to present day).

Finally, Mr. Zahajko focused on the final card, the 1952 Topps Mickey Mantle rookie card. He stated “ for any Mickey Mantle card collector, that-- if they can fit it in their budget, because even in low grades they start at about $5,000 on a one, on a scale of one to ten…” He assigned this card a five, and called it “a must-have” for any Mickey Mantle collector. He surprised the show’s guest with his value estimation of $30-40,000. He admitted that if the card was a six, then it could auction for as much as $80-120,000.

Mickey Mantle played his entire MLB career as a New York Yankee. He is regarded as one of the best switch hitters of all time, and he had the highest stolen base percentage when he retired.

The 1952 Mickey Mantle card is among the most sought after by collectors. The cards remaining on the market used to be difficult to sell.  According to an article by USA Today,  Topps had a hard time generating interest in the cards and selling the packs.

They were sold at carnivals for a penny a piece. After seven years in a Brooklyn warehouse, Topps' card pioneer Sy Berger dumped the remaining packs into the Atlantic Ocean because the company needed the space.

Cards in excellent condition can fetch tremendous amounts.  Just last month a highly rated Mickey Mantle sold for $2.8 million, the second-highest price ever paid for a card. This narrowly missed the record of $3.12 million a collector paid for a 1909 T206 Honus Wagner card in October 2016.

Currently we don’t have any sale information. So sign up for our free treasure alerts to avoid missing any developments regarding this item’s sale, or the discovery of other treasures.

Also be sure to check out the free research tools and additional research data below this story. You can research the value of your items as well get free appraisals from the world's top action appraisers.

RESEARCH SOLD PRICES - This gives you a general understanding of current market value, or the highest amounts people may be willing to pay for a particular item.

Comparing sold prices fetched by a variety of auction houses, can also help you determine which auction houses are having the greatest success promoting a particular type of item.

FREE APPRAISALS - Small details can make a big difference in a rare items price, and with forgers sometimes trying to cash in on rare items, it can be helpful to have a reputable expert take a look.

If you think you have something, one of the fastest ways to find out if it may be authentic, and valuable, is to head to our free appraisals page and check with several of the experts listed within the Sports memorabilia category.