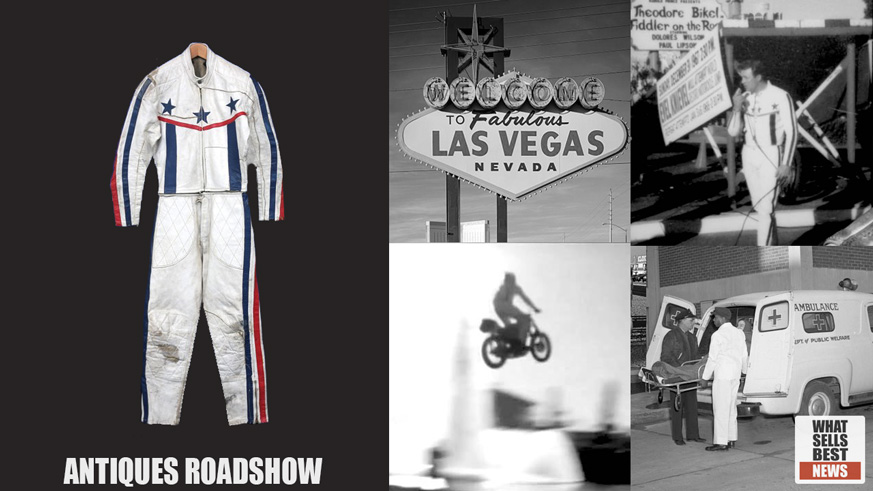 The vintage leathers may have been used at 1967 Caesar’s Palace jump. May 2, 2018
By Ruthie Bowles, Contributing Author for What Sells Best News

PORTLAND, OREGON - Antiques Roadshow reports that vintage Evel Knievel leathers, left behind in a seamstress’ shop, may be worth more than $100,000.

A guest on the Antiques Roadshow brought in vintage leathers owned by Evel Knievel (1938 – 2007), which may be worth $100,000. According to her story, her mother made the leathers for Knievel, and he brought them back to her for repairs after his Caesar’s Palace jump.

Timothy Gordon, the owner of Timothy Gordon Appraisals, spoke with this Antiques Roadshow guest about her find. He compared the leathers brought in with the leathers in a photo of Knievel just before his famous 1967 Caesars Palace jump.

The story of Evel Knievel's Caesar's Palace Jump at as told by Discovery.

He noted that in the photo, Knievel wore nice new leathers. That particular jump resulted in a crash, and the leathers brought in do show signs of an accident. At the time of the show, Mr. Gordon couldn’t confirm if it was the famous Caesar’s Palace jump (and crash) of 1967.

The Antiques Roadshow guest mentioned that in years past, they received an offer of $10,000 for the leathers, but they erred on the side of caution and refused. She seemed very shocked to hear that Mr. Gordon estimated the leathers would garner $40,000-60,000 at auction.

He ventured so far to say that if they “could confirm that this was used in that Caesar's Palace jump with the video where he tumbles down, the value would increase quite a lot. I think that the value on these would be over $100,000 at auction.”

Coincidentally, Timothy Gordon knew Evel Knievel growing up. Mr. Gordon recalls Knievel telling him that he was going to do something great, although he didn’t know what. At the appraisal, Gordon said, “He bought a pickup truck in Butte, Montana, painted his name on the side, drove to California, but he didn't know what he was going to do.”

Evel Knievel was born in October 1938 in Butte, Montana. He attained celebrity status as a motorcycle stunt driver, attempting more than 75 amazing, and sometimes inconceivable, jumps and stunts throughout his career. Despite his daredevil line of work, Knievel died at the age of 69 from pulmonary disease in 2007.

Besides the money he earned from doing stunt tours and television appearances, Evel Knievel partnered with Ideal Toys to create Evel Knievel toys. They made more than $125 million in toy sales.

Evel Knievel captured the nation’s imagination with stunts that no one else could or would do. During and after his career, he had an ardent following of fans. To this day, someone who engages in a daring act might be called an “Evel Knievel”.

As a national icon, Evel Knievel holds a special place in American history. He was inducted into the Motorcycle Hall of Fame in 1999. Finding something that he actually wore is extremely rare.

Researching prices, we found several recent sales for Evel Knievel attire, that appear to support the valuation given to the abandoned leathers (prices include Buyer's Premium).

To check for more recent sales, you can research prices free, here.

We don’t have any information regarding the sale of the Knievel leathers featured in this story, at this time. Stay tuned!

Small details can make a big difference regarding celebrity collectibles. Often designers make duplicates and cheap copies due to popularity. If you think you have something, head to our free appraisals page and check with several of the experts listed within the appropriate category.

Before contacting appraisers, research sold prices on your own first. This can give you a general understanding of current market values, and may help you find the best selling venue, if you decide to sell.

Another way to monitor the real-time price strength of more common Evel Knievel collectibles, is to keep an eye on the highest bid items (below) in the Toy and Showbiz categories on eBay.

FIND-PRICES > See how much buyers pay, for most anything.