Kept in an old shoe-box, because nobody liked it 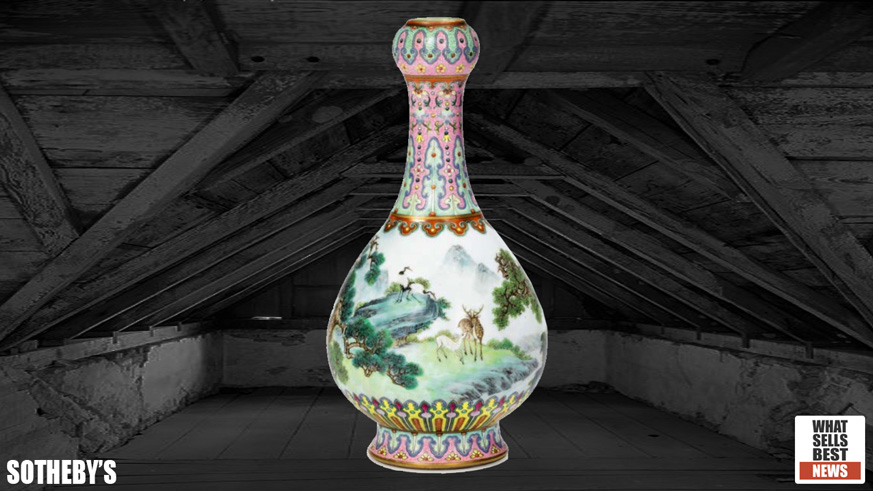 
PARIS - Sotheby's reports a rare vase discovered by chance in the attic of a family home, has fetched $19 million (€16.18 million) at auction.

The vase was left to the current owners grandparents by an uncle. Then, put away in an old shoe-box in the attic. According to a GeoBeats News report, it was because nobody in the family liked it.

The story of the vase discovery as told by Sotheby's.

It wasn't until the vase was taken to Sotheby's Paris office (still in the shoe-box) for a valuation. That the unsuspecting owners had any idea of its true value.

When Sotheby’s specialist Olivier Valmier, opened the box to take a look. He was immediately struck by the quality of the vases craftsmanship.

Research later revealed the 11-inch vase was 18th-century, and extremely rare. Produced for the Qianlong Emperor, by the finest craftsmen of the time.

According to Henry Howard-Sneyd, Sotheby's Chairman of Asian Art, Europe and Americas. Chinese art items are extremely sought after by collectors in todays marketplace.

“Chinese art has been admired and collected across Europe for centuries, but the importance of certain pieces is occasionally lost over time. Given the huge appetite for Chinese art among today’s collectors, now is the moment to scour your homes and attics, and to come to us with anything you might find!"

Sotheby's Asian art specialist can be found at the bottom of their press release here. You can also find information for free auction appraisals by other top auction houses, here.

RESEARCH SOLD PRICES - This gives you a general understanding of current market value, or the highest amounts people may be willing to pay for a particular item.

Comparing sold prices fetched by a variety of auction houses, can also help you determine which auction houses are having the greatest success promoting a particular type of item.

FREE APPRAISALS - Small details can make a big difference in a rare items price, and with forgers sometimes trying to cash in on rare items, it can be helpful to have a reputable expert take a look.

If you think you have something, one of the fastest ways to find out if it may be authentic, and valuable, is to head to our free appraisals page and check with several of the experts listed within the pottery and glass category.